Getting Drunk Was Considered a Sin in Medieval Christianity

TIL that getting drunk was considered a sin in Medieval Christianity. Alcohol itself was considered permissible, but drinking to the point of inebriation was considered a subset of the deadly sin of gluttony.  The full reddit thread on r/askhistorians can be found below, although I’ll quote the relevant parts:

Prevalence of Alcoholism in Middle Ages? from AskHistorians

Americans today (I understand ideas about alcoholism and its treatment can be quite different) tend to think of alcoholism as an addiction or even a disease. This was not so in the Middle Ages. Inebrietas–inebriety or drunkenness–was normatively a sin, a subset of the Deadly Sin of gluttony or overconsumption.

We must separate the rhetoric of preachers from the daily lives of medieval people (including, presumably, many of those preachers). An evening at a formal or informal tavern was the heart of socializing for a lot of urban people. It’s not for nothing the tavern was derided as the “chapel of the devil”; it was the secular parallel for social life to the Church and religious civic gatherings. As with today, not everyone would get drunk, and even fewer of those would get drunk so often and compulsively as to compare to modern alcoholism. And of course, the role of alcohol in the display of battle prowess and noble/royal power is well known to anyone who read Beowulf in high school….

…But in the background, and increasingly pushed by preachers and didactic authors over the 14th through 16th centuries, was the point that drunkenness inherently represented overconsumption, a focus on the material world and personal pleasure that distracted from God. It was a sin. And in both prescriptive theoretical sources and actual criminal records, medieval people knew and experienced the costs of inebriety.

In theory, drunkenness would lead to other sins. It loosened the tongue and mind, resulting in a rise to wrath. Naturally in women in particular, it heated the body and aroused it to lust. It led the drunk person to forget about others, greed. And so on. Meanwhile, coroners’ rolls from England and court records from French and German cities attest handsomely to the fights, assaults, and murders inside taverns and spilling onto the streets outside.

This is still just alcohol consumption, though. What can we say about the compulsion to drink caused by a pattern of overconsumption? First, in the medieval imagination though not in practice, pattern inebrietas was gendered heavily male. In German popular literature, there were two stock “parents who waste their family’s money” figures. The woman is the haute palate, the one who must always have the richest food, the most expensive clothing while her children go hungry and threadbare. The man, however? The man spends every night at the tavern, drinking away his children’s bread. The latter, at least, had a basis in reality. Women in early modern Germany sometimes petitioned their cities for emergency financial support or for legal living-arrangement separation from their husband, because he was ruining the family financially through drinking every coin. 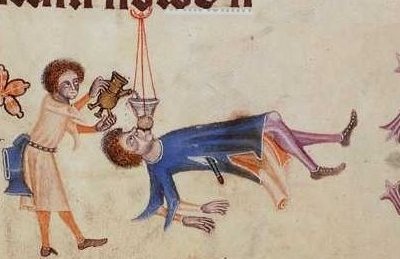 On the other hand, we have firsthand accounts from women who ask Jesus to help them drink less, because drinking too much is a sin. Since this is clearly moving into a more religious/moral frame, it’s important to point out that religious sources are actually one of the better places to look for evidence of chronic drunkenness. Popular pastoral writers like Johann Herolt recognized that different types of people were differently susceptible to alcohol. More importantly, though, they recognized that people got drunk by accident and on purpose. Someone who did not realize a drink could make someone drunk and so drank too much did not sin. People who understood a drink could make someone drunk but were not intending such a fate for themselves sinned only venially (minor sin). Drinking was only the mortal sin of gluttony when someone knew perfectly well the drink would make them drunk and went for it anyway.

Although no one is going to be heralding a medieval version of Alcoholics Anonymous anytime soon, I think it’s also noteworthy for considering alcohol drinking versus abuse that the solutions for inebriety were part of an overall life restoration. In the moment, potential drunk-ers were encouraged to think about Christ’s Passion, using your suffering for avoiding the lure of sin as a prayer and a meditation to connect you closer to Christ in his suffering. Over the long term, the goal was to achieve a sense of moderation and balance in consumption of alcohol along with other worldly pleasures–to remember that the ultimate treasures were heavenly, not bodily. People should remember with each drop of drink that they would have to account for their actions at Judgment Day, and use that template as a guide for sobrietas in alcohol and in all things.

Drunkenness was a staple element of medieval social life, there’s no question. But there’s plenty of evidence that some people indeed pushed it too far, to the point of crime, ruination, and even their own deaths. How often that happened is unfortunately impossible to say. But it was frequent enough to leave an emotional scar in popular and pastoral literature as well as in the ruined lives of the alcoholics’ spouses and children.

As Muslims, we should be grateful to Allah that we were saved from the evils which excessive drinking brought by forbidding alcohol within a Divinely revealed Law, in contrast to the much weaker and malleable Christian development of Natural Law. The Shariah said no, full stop. Don’t even go near it! I think there is a semi-serious case to make that alcohol-inspired fornication destroyed Western Christianity (at least as a major contributing factor) if we consider the Ruh as the primary level of being). Sin destroys the spirit, may Allah protect us from that.