As we stated earlier, before we can answer the question “how can I know that God exists?” we must first ask the question “how do I know anything at all.” There are multiple ways that the intellect comes to know, and these modalities (or ways) of knowing are arranged hierarchically. I will go from the lowest form of knowledge to the highest – though this may seem unintuitive to the modern mind, which has been conditioned to see certainty as ordered in precisely the opposite direction. I will sort out these modern confusions as we proceed upon each level, inshaAllah.

The lowest form of knowing, and the least certain is that of sense perception. “Huh? But I thought you had to see it to believe it?” you may ask.

Ah, but you see sense perception deceives us all the time. We readily admit that. Sometimes we see things that aren’t really there, and sometimes what we see does not reflect reality. For instance, we perceive the earth as being flat, the sun as setting upon the horizon, the stars as being small, and if I were to put my finger in a glass of water it would appear to break due to the refraction of light. 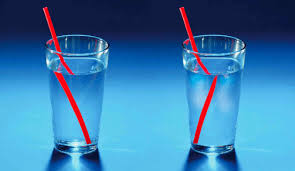 Your eyes deceive you

Take a look at this clip around 12:30 where Dawkins himself says that if he were to see a direct sign of God – the heavens opening up and seeing the angels – he would still disbelieve in God. Instead, he would find it more probable that he were hallucinating, that David Blaine or some magician were playing a trick on him, or that aliens with some advanced technology could manipulate reality to make him think he were seeing what he were seeing.

You can hear his own words here:

Nor is Dawkins alone in this sentiment. Here is a thread where hordes of atheists claim that they would find some other explanation even if they witnessed a grand miracle before their eyes.

Read Michael Vogel's answer to Many atheists say if they saw God, they'd believe in him. Wouldn't treatment for hallucinations be a more rational course of action? on Quora

Read Barry Hampe's answer to Many atheists say if they saw God, they'd believe in him. Wouldn't treatment for hallucinations be a more rational course of action? on Quora

Read Roberto Vilar's answer to Many atheists say if they saw God, they'd believe in him. Wouldn't treatment for hallucinations be a more rational course of action? on Quora
You get the point.

The Quran portrays such ardent disbelief:

And [even] if We opened to them a gate from the heaven and they continued therein to ascend, they would say, “Our eyes have only been dazzled. Rather, we are a people affected by magic.”

Now, it is unimportant presently to discuss whether such sentiments are indeed rational. Rather, it is simply to point out that the only way such a judgment could exist; namely that sense perception is wrong, is if there is something above and beyond sense perception which is doing the judging – or at any rate helping us to make the judgment that the senses are deceiving us. This aid is called reason. That which is doing the judging is the consciousness at the root of your existence.

Reason helps to make clear to consciousness truth from falsehood, illusion from reality. You see, it is also possible the straw might be reforming immediately upon exiting the water, and breaking immediately upon entering it. But reason dismisses this possibility as too improbable, and instead reason opts for the judgement that our very eyes deceive us.

Sense perception, thus unsurprisingly, is not in the least immune from error. But this is not exactly true. I have been using the words “sense perception” somewhat colloquially thusfar. More accurately, the judgements we make based on the conception that the senses deliver to the mind is not in the least immune from error. You see, sense perception itself can never err insofar as we understand it to be the impression created in the mind. Even if you were hallucinating and “saw” a ghost – you really would be seeing a ghost in your mind. This you cannot doubt, and it could not possibly be in error; the conception is known by presence (or intellectual intuition). Rather, what is in error is that this conception correlates to some reality (i.e. when you go from seeing a ghost in your mind to judging that there really is a ghost in the room, that it is not simply a figment of your imagination).

To put this more succinctly: there are two stages of knowing (at least as far as we are concerned here) – impression and judgement. An impression in your consciousness can be formed through sense perception. You might experience a smell, or see a ghost as in our previous example. In as far as you are actually experiencing this, it can never be “false” (subjectively); what can be in error is the judgement we make that something in external reality correlates to the impression in the mind. Your discursive mind makes this judgement. Reason is more important than you think.

Sense perception suffers from an imperfection – it is limited. We cannot perceive with our senses the vast majority of the electromagnetic spectrum, including x-rays, infrared and ultraviolet light, and radio waves. The senses cannot detect subatomic particles, nor can they encompass very far into space nor time. With a little imagination, it is easy to conceive of just how much we possibly don’t know. The religious claim that our universe is inhabited, perhaps at a different frequency or plane of existence, by angels, jinn and what the pretentious might regard as fantastic creatures is, in fact, all too possible, but entirely unverifiable with sense perception. We have no reason to think that sense perception is telling us the full story, and very good reasons for thinking that it is not (in fact we know it’s not). To dismiss, therefore, what is currently unverified by scientific inquiry, when only a few centuries ago something like electromagnetic waves, or quantum mechanics would have seemed equally laughable, seems to me to be a little hasty.

This is not to suggest that angels will ever be verifiable by the scientific method, as electromagnetic waves eventually became, but rather it is simply to open the reader’s mind to the possibility that the universe is far stranger than we know. In fact, I will be arguing that the scientific method is not our ultimate source of knowledge – consciousness is, and angels are verifiable through the ascension of consciousness into higher realms of being. My point here is merely that the kind of mockery that certain atheists deride the religious with ad nauseam is not really on any solid grounds. Rather, it represents a preconceived notion of what the universe must ultimately be like (essentially some kind of complicated pinball machine), despite how little we know of it. A small dose of humility with a side of open-mindedness would lead one to at least taking seriously the agnostic position and acknowledge that there may well be higher orders of being as the mystics have claimed throughout the centuries.

Empirical observation is not as important as we might think. What does the heavy lifting in science is actually inductive inference, though to be sure I am not denying the importance of empirical observation as data points in the inductive logic machine. What I am saying, however, is that the confident dismissal of a Higher Power simply on the grounds that we should only believe what we see, what is material, what is “empirically testable” is really more empty rhetoric and a kind of moralizing about a narrow and short-sighted understanding of Reason™ more than anything.

In the next posts we will explore the way reason works and establish the legitimacy of deductive logic (which is what we need for metaphysical reasoning). We will also show, God willing, that science depends on the validity of deduction and so one cannot both affirm science and deny metaphysical argumentation, as is unfortunately common today.