“You” Are Not Your Rational Mind

In the name of Allah, the All-Merciful, the Especially Compassionate,

Previously, I had explained why the best translation for the Arabic term aql is consciousness. I also detailed the change in the meaning of the Latin term intellectus to its modern English connotation of being solely related to the rational mind. I am assuming you understand this and I will be using the words consciousness, aql, and intellect (in it’s Latin sense) interchangeably throughout all my future posts..

Today the topic I’d like to discuss is the different means through which our consciousness gains knowledge and in doing so, explain exactly what knowledge is. I had slightly touched upon this in my earlier piece, but I would like to delve further. Due to the length of this topic, I have broken it into a series. This can be considered the second, with the post on the aql being considered the first.

The Modalities of Knowing 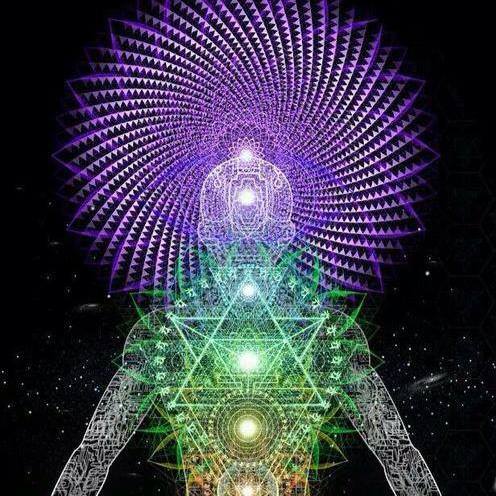 There are different ways in which your consciousness ascertains knowledge of reality. Generally this happens through the a certain “organ” which God has created for a certain kind of knowledge that we are privy to.  Not all of these methods are equal. For the less important methods, I will just offer just a brief sketch.

This is pretty obvious, but you gain knowledge of things that you can see, hear, touch, taste, etc. This mode of knowing is sometimes given to error, and must be corrected by the rational mind.

Ever have a gut feeling? The body allows us to gain knowledge not just of other people, but also of ourselves. The body allows us to feel lust, physical pain, and various other emotions. These emotions are themselves a kind of direct knowledge of the self that intrudes into our consciousness (i.e. that I am in pain, or that I desire so and so), but also gives us knowledge about the world by inference (i.e. that this object is dangerous, or that that person is attractive.)

You may notice that there are Buddhist, Hindu, and Taoist meditative techniques which allow one to get in touch with their body. These consist of things like breathing techniques, techniques allow one to relax certain body parts, to move energy (chi) around the body, and more. To my knowledge, not much emphasis has been placed on this in Islam, probably because it is extrinsic to true happiness and spirituality. Once one is able to focus the Divine Reality within the heart, things like “breathing meditation” become superfluous because inner peace has been found. 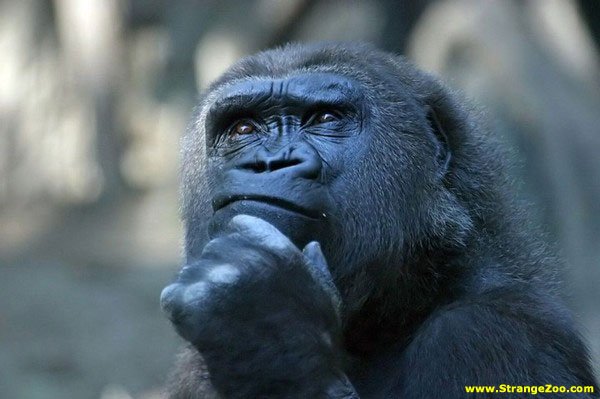 Our General Experience of It

The previous organ explored, namely the body, should at least help this make sense, albeit only partially. Even if you are not in touch with your heart yet (which is when you’ll really be able to dissociate from the mind), you’ve no doubt experienced moments where your consciousness was so totally focused on your body, that your mind – for a moment at least – fell silent. This kind of “meta” experience should help you realize that your consciousness is deeper than the constant and random thoughts which occur in your mind.

Another reason we attach ourselves to the rational mind is not only because are focused on it, but also because it has been chattering for as long as we can remember. An example I can give to help illustrate this is; suppose throughout your entire life you felt a numb pain. Chances are, you wouldn’t even realize that you’re not supposed to be feeling that – you would just assume that this is a normal part of conscious experience. Likewise, if all your life the sun never went down, you would not know darkness. Because the rational mind is always speaking, we think that it is us, when it is only an organ like our eyes, ears, or heart. You see through your eyes, but “you” are not your eyes. Likewise, you think through your rational mind, but you are not your rational mind. Your rational mind is on the surface of your being, “you” are actually deeper than that.

I will detail in future posts exactly how this (mis)identification with the rational mind damages your happiness level, inshaAllah. For now, however, suffice it to say that the rational mind is able to connect to a concept of God, but unable to connect to the reality of God; He who is closer to us than our jugular veins and Who’s Mercy encompasses all things. The reality of God can only be seen with the heart. God being the source of all good, joy, being, beauty, truth, and happiness directly emanates these things into the whole of our beings, through our hearts, once our hearts remember Him. This is known as dhikr, and it is the most important aspect of all of Islamic spirituality.

Here is a diagram to illustrate the basic idea I have detailed here. The heart is faded out because it will be discussed in a future post. 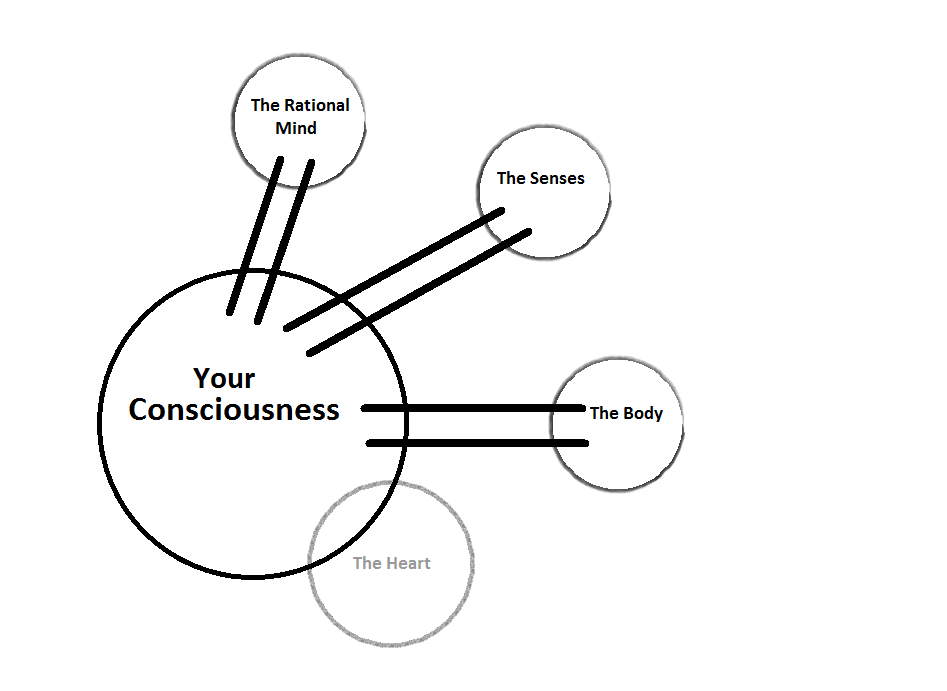 Here are some verses and hadith to back up the claims I’ve made here:

The Prophet Muhammad (SAWS) said: “Whoever knows himself [alt. his self] knows his Lord.”

Everyone knows their rational mind, therefore the deeper self must not be the mind only otherwise this hadith would be banal; yet it is regarded as one of the most important hadiths in the entire Islamic canon.

The Lies we tell ourselves

This shows that the rational mind can put forward excuses, and yet there is something deeper in the human being which recognizes “the lies that we tell ourselves.” If the rational mind is producing a lie, who/what is it producing a lie to? What is it that is recognizing it as a lie/excuse? If you can experientially realize what it is that is understanding that we are telling ourselves a lie, you are 90% of the way there. In fact, this general principle applies beyond just lies that we tell ourselves. It applies to everything that the human mind produces. Every single random thought that occurs is not you thinking, but rather a thought being presenting to you. “You” experience the thought.

the Emphasis Of the Quran on the Heart

If we were just our rational minds, then as soon as someone assents to the propositions that there is only One God and that Muhammad is His Messenger, one should have attained full faith. At most, what could be required is studying a few more theology books to gain a deeper mental understanding of what tawhid means and the wide-ranging debates between the various theological schools. After all, on this view we are just what we think, right? So once someone has the “right” set of mental propositions about what tawhid means, one should have attained full faith. Unsurprisingly, this is implicitly the view of the Wahhabis who argue excessively about aqeeda for precisely this reason. I will elaborate on this further in future posts

Yet, the Quran explicitly negates this point of view, which means that there must be more to ourselves than just what we think. In fact the propositions we assent to are only meaningful insofar as they inform our hearts. I have already given an abundance of proof for this in my previous post on the aql, without even scratching the surface. Here’s a reiteration of the most relevant verse:

The bedouins say, “We have believed.” Say, “You have not [yet] believed; but say [instead], ‘We have submitted,’ for faith has not yet entered your hearts. And if you obey Allah and His Messenger, He will not deprive you from your deeds of anything. Indeed, Allah is Forgiving and Merciful.” (49:14)

Except he who comes to Allah with [alt. by] a sound heart.

There are also countless verses on nifaaq to this effect, but for the sake of brevity I have not included them.

You are not your rational mind. You are deeper than that, and can be more closely identified with your heart. The rational mind plays an important role which will be explored in future posts.

In the next post, we will cover the heart in itself, as well as the relationship between the other organs and the heart. After that, we will explore the effects of believing that you are the rational mind, and consequently neglecting the heart, upon your happiness level and the way in which the rational mind compensates for this. Thereafter, we will survey the history of Western thought so as to help us identify what exactly went so wrong in Western civilization, the social ramifications of this and the consequence it has had on us. Somewhere along the way, I hope to share a few techniques on how to awaken the heart and the consequences it will have on your life, inshaAllah. I pray that the Generous Lord give me the tawfeeq to participate in this noble work, and to Him belongs all Glory.